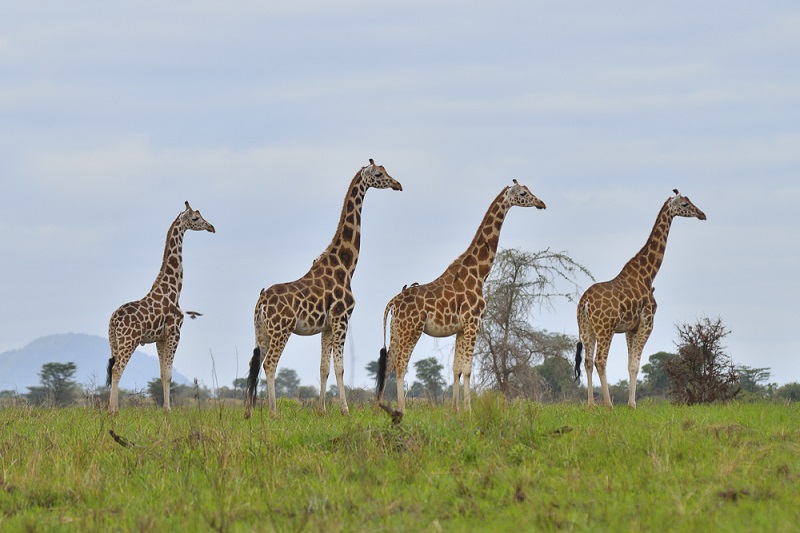 Kidepo Valley National Park lies in rugged, semi-arid valleys between Uganda’s borders with South Sudan and Kenya and some 700 kilometres from Kampala. The park is on the altitude ranges between 914 – 2,750m above sea level and the park contains two rivers, the Kidepo and Narus rivers which disappear in the dry season and leaving just pools for the wildlife.

The local communities around the park include Pastoral Karamojong people similar to the Maasai of Kenya and IK, a hunter gatherer tribe whose survival is threatened.

The park was gazetted as a National Park in 1962, it has a profusion of big game and hosts over 77 mammal species as well as 475 bird species and its Uganda’s most isolated National park due to location but a few who make the long journey North through the wild frontier region of Karamoja would agree that it is the most magnificent since it ranks among Africa’s finest wilderness.

The seasonal oases near the Apoka combine with the open savannah terrain and make the Narus Valley the park’s prime game viewing location, Apoka is in the heart of the park that extends far beyond the gazetted area towards the horizons outlined by distant Mountain ranges.

For game drives in this park, it is advisable to move with a park ranger who will help you spot the lions that may be sitting on the valley’s various rocks. Other wildlife includes elephants, leopard, bush duiker, jackal, bushbuck, bush pig, ostrich, buffalo and much more, in the wild Narus Valley.

Getting to Kidepo Valley National Park

The park can be reached by both road and air transport. Driving is rewarding because you get a glance of unspoiled wilderness though some roads are muddy and slippery that’s why 4WD van is essential.

These are four possible routes by the road to Kidepo Valley National Park;

Routes passing West of Lake Kyoka through Acholi land are Kampala-Karuma-Gulu-Kitgum-Kidepo 571kms with a duration of 10hours and another route is from Kampala-Karuma-Lira-Kotido-Kaboong-Kidepo which is 705kms and 12 hours.

Charter flights to Kidepo may be arranged from Kampala (Kajjansi), Kampala Aero club, or Entebbe with Eagle Aviation. Flights take about two hours. The Civil Aviation Authority plans to make Lomej airstrip near Apoka, an international airport to enable visitors to fly direct to Kidepo from other countries.

Aid assistants you need to bring in the park

Kidepo is extremely hot with basic facilities. You should bring light clothing, sunscreen, a hat and sunglasses. You should also bring a flashlight with spare batteries (including camera batteries) as there is often no power in the park, though solar power may be available for charging batteries. Binoculars are also recommended for wildlife viewing.

Overlooking the game is a rich Narus Valley and home to an upmarket lodge and simple UWA-run cottages, Apoka is the park’s tourism hub. Ranger guides are stationed at Apoka to escort tourists on game drives and walks. There is a craft shop with books and souvenirs; bottled water, sodas and alcoholic beverages can also be purchased here. Food is cooked on request and cooking gas and utensils can be hired by individuals who wish to cook for themselves.

Narus Valley is a rolling, grassland plain enclosed by distant mountains and the valley has permanent water, and for much of the year the park’s wildlife congregates here. Thus, the area is well provided with game tracks, with four loop circuits exploring the valley around Apoka. Many creatures such as lions, Jackson’s hartebeest, buffaloes, giraffes, oribis and reedbucks can be seen in the valley. Less commonly seen are cheetahs and leopards. The Narus dam and the water hole near the Tourism Centre are perfect observation points for game, especially during the dry season. At the southern end of the Katurum loop, Katurum kopje is an attractive destination with superb views north across the valley towards the Morungule mountain range.

For most of the year, a lack of surface water means that little wildlife is found in Kidepo Valley, though it is still worth the drive to visit the dry Kidepo River to stroll along its 50m wide bed of white sand between banks covered with borassus palms. Kidepo means to pick from belowand the valley was visited by people coming to gather fallen borassus fruit for fermenting to make palm beer. The Kanangorok Hot Springs lie 11km beyond the Kidepo River on the Sudan border. This is a glorious place to sit and view the mountains beyond the frontier.

The dry Kidepo Valley is short on big game but massive on scenery. The hour-long drive to Kanangorok Hot Springs passes some magnificent landscapes. 30 kilometers north of the park’s tourism hub at Apoka, the road crosses the dry, sandy bed of the Kidepo River to enter an expansive plain lined to the east by the Morungule mountain range and to the north by the looming, 2975m high Jebel Lotuke in South Sudan. Mammals are rare in this area but ostriches and secretary birds are often seen.

Mount Morungole stands at 2,750m and is crossed by the Kidepo and Narus Rivers that nourish the park’s wildlife and this natural habitat as a whole. The Morungole Range marks the southern boundary of the park and rises from the plains a few kilometres northeast of Apoka. This region can be explored on foot with a ranger. The mountain slopes are home to the IK people, the smallest ethnic group in Uganda, with their own unique culture.

Namamukweny is a Napore word meaning a place with no birds or a lonely place with few people – though regarding the birds, quite the opposite is true! The valley is inhabited by a large number of bird species such as the Eastern Paradise Whydah, White-crested Turaco, Common Bulbul, Abyssinian Roller and Green Wood Hoopoe among others. It is located in the north-west of the park and can be accessed by car or on foot.

The Lomej Hills are a short drive from the headquarters. They are a good viewing point for birds and wildlife, including the mountain reedbuck.

Lying between Kitgum and the Sudan border, Lonyili Mountain is largely covered in montane forest and home to primates such as colobus monkeys. Due to poor conditions in this area the road is currently out of use. There are plans to repair it – you are strongly advised to contact UWA for updates before embarking on your journey to the mountain.

Kidepo national park is among the rugged hills and valleys in the northern part of Uganda a place hidden which was gazetted in 1962 to become a national park. It is a home of one of the small ethnic group of people known as the IK which is the most isolated tribe believed to have come from Ethiopia hundreds of years ago. Kidepo National Park is a good place for those interested in the traditional customs and dances of the Acholi’s and Karamojong’s plus other great tribes. The national park also harbors nearly 77 mammal species including caracal, striped hyena, bat-eared fox, and cheetah. During game drive, one can look out for buffalos, giraffes, and lions too with the short nature walks at Apoka can view zebras, reedbucks and many others. Kidepo National park also harbors approximately 475 bird species exciting for bird watching.

Our customer support team is here to answer your questions. Ask us anything!
👋 Hello, I am here to help you
Chat with Us